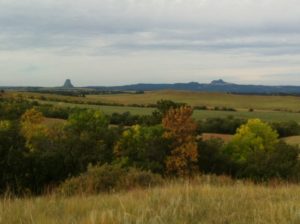 Hiram and John Mahoney (brothers), along with their families, homesteaded first in Centennial Valley between Spearfish and Deadwood then moved to this homestead south of Alva in 1886. They came from Magnolia, Iowa.

The story is that after starting their original homestead in South Dakota, the brothers noticed that to find plentiful game animals to hunt, they were traveling further into the hills. The area that seemed richest in game also had the best vegetation. They eventually uprooted and moved to this site, where they had done most of their hunting. They brought with them registered Hereford cattle, registered Belgian horses, and chickens.

The original log cabin built here was constructed with Ponderosa pine logs from the adjacent hill from the present home site and skidded down with oxen teams.  John and his family homesteaded at the neighboring (now Rauth Ranch). Hiram and his family had the adjoining ranch 2 miles further up Lame Jones Road. Hiram was married first to Belle Tuttle and later to Orah McClendon. From these marriages, 7 children were born. One of them being Jay Smith Mahoney who ranched here after his Dad (Hiram) passed away in 1920. Jay married Lorene Gray and they had 5 children. Their oldest son, Gerald Jay Mahoney with his wife Betsy (Owen) Mahoney, continued the ranching tradition until he sold the ranch to his daughter, Beth in 2008. 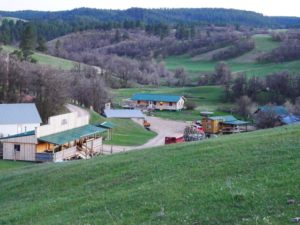 The ranch has grown from several homestead parcels to its present size of  8,500 acres.  Substantial growth came as Gerald and Betsy (Owen) Mahoney bought several sizable neighboring ranches and added much to the size and versatility of the present ranch. The Diamond Seven Bar name is taken from a livestock brand that Gerald bought and began using.

Steeped in history and heritage, The Diamond Seven Bar Ranch, continues the ranching tradition started those four generations back. Much blood, sweat, tears, laughter and song is mixed with the soil of this place and it stands as testimony to the hard work and big dreams of the Mahoney family (and many families like ours). 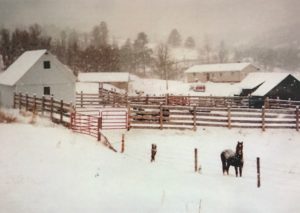 There are many stories of life on the ranch including, children dying of diphtheria (two in one day), pranks played on school marms in the one-room schoolhouse on the property, a double murder that ended in a hanging, the breaking of the locoed horse, and the list goes on.

The rich history is part of what makes this place so special and also why we care so much about carrying on the quality and tradition that we have become known for. We look forward to sharing with you part of that heritage.